Scientists at University of California, Los Angeles have developed a rapid new test for spotting proteins within blood and plasma. Unlike current tests that can take up to four hours to perform, the team’s technique takes only 10 minutes and can be done right inside the doctor’s office instead of a clinical lab.

Typically, enzymes are used to amplify the protein signal, but they introduce their own problems such as difficulty in handling, high associated costs, and false positives. Instead, the team did away with enzymes altogether and focused on developing a chain reaction that is initiated when the specific protein being searched for is present.

To that end they used DNA complexes made of DNA strings that are formed when the protein in question is present. When the DNA strings form a complex as a reaction to the protein, DNA signaling molecules are released to trigger the creation of more complexes. As more are formed and more signaling molecules are released, the reaction becomes apparent.

The process happens at room temperature and can be used to target a wide variety of proteins that are biomarkers for cancer and other diseases. Perhaps one day primary care physicians will be able to perform cancer screening and other precision diagnostics right during an office visit.

From the study abstract in ACS Nano:

Herein, we design a transduction mechanism whereby a protein signal is transduced into an amplified nucleic acid output using DNA nanotechnology. In this system, a protein is recognized by nucleic acid bound recognition elements to form a catalytic complex that drives a hybridization/displacement reaction on a multicomponent nucleic acid substrate, releasing multiple target single-stranded oligonucleotides in an amplified fashion. Amplification power and simple one-pot reaction conditions lead us to apply the scheme in an assay format, achieving homogeneous and rapid (∼10 min) analyte detection that is also robust (operable in whole blood and plasma). In addition, we demonstrate the assay in a microfluidic digital assay format leading to improved quantification and sensitivity approaching single-molecule levels. 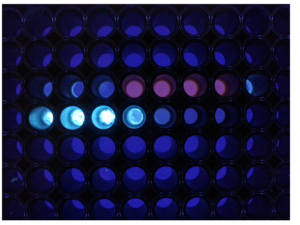