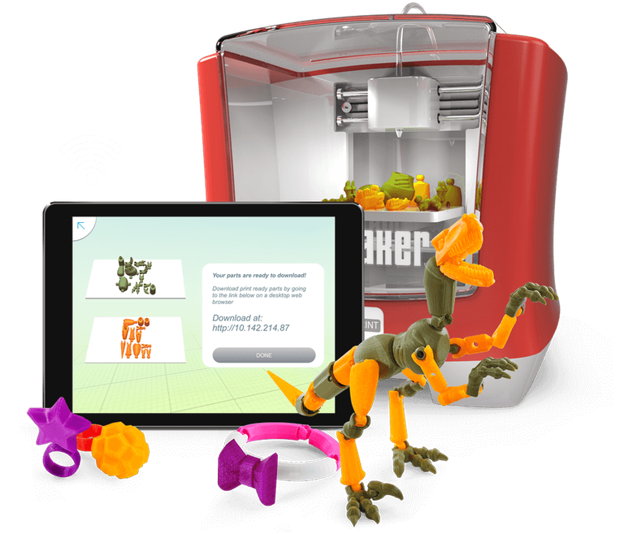 Mattel is about the change the way how kids think about toys. The company recently revealed a new app and 3D printer called the Mattel ThingMaker at the New York Toy Fair. The 3D printer will enable children and parents to build their own toys using simple mobile apps and the printer.

Mattel has built the Mattel ThingMaker mobile apps in collaboration with software companyAutodesk, a company that creates software used by creatives and inventors of all abilities.

There’s no shortage of budget 3D printers in the market but they all come with one main issue — software. Getting things printed can be a daunting experience for children as well as adults because current software is far too complex for people to use. Mattel’s ThingMaker will change all of that, and bring more kids to the world of 3D printing.

Although the company mentions that the Mattel ThingMaker 3D printer is designed for children above 13 years. It’s quite obvious that the printer would also appeal more to little kids too, and with adult supervision they can easily join in the excitement of making their own toys too.The apps themselves are quite simple to operate and can be used by just about anyone.

In its press release, the company describes the Mattel ThingMaker as handing over “keys to the toy factory” to children, a shrewd business move, but also a commendable one, given the popularity in both 3D printing and stem toys. Although the 3D toy printer is very much a modern product, this is the second iteration of Mattel’s ThingMaker.

The original ThingMaker first debuted in the 1960’s as one of the world’s first at-home  maker devices. In the same press release,  Aslan Appleman, the senior director, at Mattel went on to say the following about the new device: ” the Mattel ThingMaker pushes the boundaries of imaginative play, giving families countless ways to customize their toys and let their creativity run wild. We’re thrilled to work with the 3D design experts at Autodesk to bring this one-of-a-kind experience to life.”

ThingMaker apps are available on both iOS and Android and children can design and print their own toys using the simple-to-learn user interface. The app is called ThingMaker Design, and includes a number of in-built templates comprising of multiple characters, shapes, and other useful items. Children are the main intended audience for the app and therefore the user interface is a lot easier to use.

Once a design has been created, it can be exported to the printer wirelessly. Apart from building simple toys, children can take things to the next level by building larger toys using multiple simple components, each printed individually and assembled via a ball and socket joint mechanism.

Also referred to by some as the Thingmaker Oven, the Mattel ThingMaker uses a hard PLA filament and although Mattel hasn’t officially revealed the available colors at launch yet, the company had quite an array of colors available for display during its announcement.

Mattel is also expected to offer more colors depending on how the market reacts to the 3D printer. According to the company, a variety of additional filament color options will be made available in the future. This will also include more design content within the mobile apps as well as branded options. Consumers can also use the ThingMaker Design App with other 3D printers.

The 3D printer has been designed keeping in mind its target audience. This ensures kids do not have access to any element on the printer that might be hot or an injury risk during an operation.For example: the Thing maker toy printer’s door will not open while it’s executing a specific task but children can still experience the 3D printing process by watching the process through the transparent door on the front of the machine.

Some of the simple use cases that the company has projected include dolls, robots, dinosaurs and even wearable accessories. Mattel owns a number of childrens toy brands already and the suggestion is that the company may tie these in with ThingMaker in the future.

The Mattel ThingMaker is more of an ecosystem, in development, for Mattel which will comprise of the hardware, apps, and possible third party integration with reputed toy brands which may sign up later on. 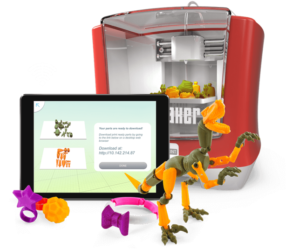