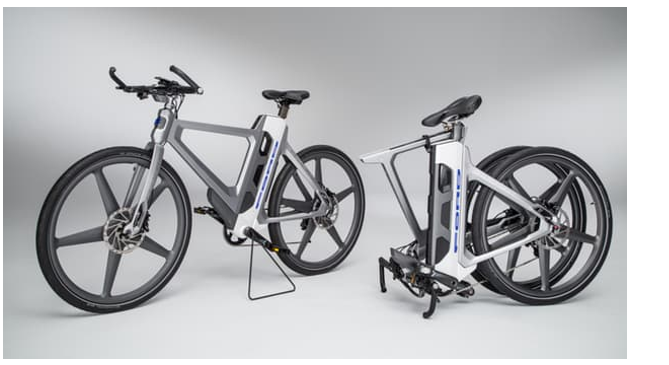 Earlier this year, Ford previewed its Mode:Me and Mode:Pro electric bike concepts. The bikes were envisioned as key components of a multimodal transportation ecosystem that would also incorporate cars and public transit. Recently, it added the Mode:Flex e-bike prototype, which uses the latest wireless and connectivity technologies to integrate further into a coordinated transportation system.

The Mode:Me folding commuter bike and Mode:Pro delivery bike concepts were born out of an internal e-bike design competition. Ford revealed them at Mobile World Congress back in March and has continued its research in the area since then.

When compared to the narrow focuses of the original two bikes, the third prototype in Ford’s ongoing research is designed for a broader demographic of bicycle enthusiasts. Its multipurpose frame can be configured for urban commuting, mountain biking or road cycling, though Ford doesn’t explain or show exactly how the bike magically transforms between these different configurations. The new bike features a more traditional diamond-frame design when compared to its predecessors, but things stray from the norm at the bloated seat tube, which houses the battery and electric motor drive.

Nothing about that bulky, electric-assist frame yells “fast, trail-hungry mountain bike,” and we’re not sure that any bike should convert between road and off-road configurations. Some tools are better left to stand alone rather than Swiss army knife.

The Mode:Flex design does seem optimized for urban commuting, where Ford sees it working as one of the modes within a smooth, seamless multimodal transportation system. It doesn’t fold, but it does break clean in half. The front triangle detaches from the battery cage, splitting the bike for transport (another reason why we wouldn’t ride it on anything rougher than a paved path). Ford imagines riders driving to a convenient, low-cost public parking area outside the dense city center, pulling the Mode:Flex out of the trunk and biking the “last mile” of the journey. The battery can be charged directly from the vehicle outlet.

The multipurpose, breakaway frame may have you thinking that the Mode:Flex looks just like a bike designed by an auto manufacturer – in other words, a bike sculpted by automotive folks that haven’t actually ridden bicycles since childhood. The fact that Ford is a car manufacturer dipping its toes into e-bike design isn’t all bad, though. It does use its automotive background to its advantage, equipping the e-bike prototype with some interesting auto-inspired features.

The Mode:Flex gets a bit of the autonomous tech that is taking over the auto industry. An ultrasonic rear sensor provides a warning when cars approach from behind, both via the handlebars and the accompanying Mode:Link app. It also has the latest LED headlight and taillight technology, derived from vehicles like the F-150 and Ford GT, integrated into its construction.

“The LED lighting is efficient and detailed in a way never before done in the bike world,” explains Bruce Williams, the lead designer and engineer behind the bike. “The lens elements are very small, but they throw a lot of light.”

Ford revealed the Mode:Link app with the original two Mode e-bikes back in March and has since added a smartwatch extension. The new smartwatch app includes a “no sweat” mode, which adjusts output of the bike’s electric drive based upon the rider’s watch-read heart rate, with the aim of preventing him or her from breaking a sweat.

Ford revealed the new Mode:Flex last month as the latest update of the Smart Mobility Plan it first announced in January. We don’t see any information about the bike’s specific drivetrain, so we’re left to assume that it packs the same 200-watt motor and 9 Ah battery as the Mode:Me and Mode:Pro. All three e-bikes are still just prototypes. 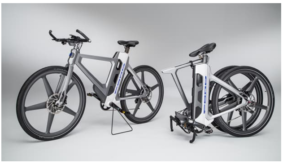