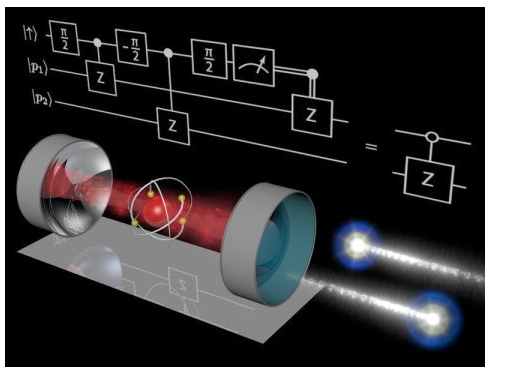 Scientists have realized a photon-photon logic gate via a deterministic interaction with a strongly coupled atom-resonator system.

“Nothing is impossible!” In line with this motto, physicists from the Quantum Dynamics Division of Professor Gerhard Rempe (director at the Max Planck Institute of Quantum Optics) managed to realise a quantum logic gate in which two light quanta are the main actors. The difficulty of such an endeavour is that photons usually do not interact at all but pass each other undisturbed. This makes them ideal for the transmission of quantum information, but less suited for its processing. The scientists overcame this steep hurdle by bringing an ancillary third particle into play: a single atom trapped inside an optical resonator that takes on the role of a mediator. “The distinct feature of our gate implementation is that the interaction between the photons is deterministic,” explains Dr. Stephan Ritter. “This is essential for future, more complex applications like scalable quantum computers or global quantum networks.”

In all modern computers, data processing is based on information being binary-coded and then processed using logical operations. This is done using so-called logic gates which assign predefined output values to each input via deterministic protocols. Likewise, for the information processing in quantum computers, quantum logic gates are the key elements. To realise a universal quantum computer, it is necessary that every input quantum bit can cause a maximal change of the other quantum bits. The practical difficulty lies in the special nature of quantum information: in contrast to classical bits, it cannot be copied. Therefore, classical methods for error correction cannot be applied, and the gate must function for every single photon that carries information.

Because of the special importance of photons as information carriers — for example, for communicating quantum information in extended quantum networks — the realisation of a deterministic photon-photon gate has been a long-standing goal. One of several possibilities to encode photonic quantum bits is the use of polarisation states of single photons. Then the states “0” and “1” of a classical bit correspond to two orthogonal polarisation states. In the two-photon gate, the polarisation of each photon can influence the polarisation of the other photon. As in the classical logic gate it is specified beforehand which input polarisation leads to which output polarisation. For example, a linear polarisation of the second photon is rotated by 90° if the first one is in the logic state “1,” and remains unchanged if the first one is in “0.” In contrast to classical logic gates, which would be fully specified by such a description, a quantum gate can take on an infinite number of possible input states. The quantum logic gate has to create the correct combination of output states for each one of these.

In the experiment presented here two independently polarised photons impinge, in quick succession, onto a resonator which is made of two high-reflectivity mirrors. Inside a single rubidium atom is trapped forming a strongly coupled system with the resonator. The resonator amplifies the light field of the impinging photon at the position of the atom enabling a direct atom-photon interaction. As a result, the atomic state gets manipulated by the photon just as it is being reflected from the mirror. This change is sensed by the second photon when it arrives at the mirror shortly thereafter.

After their reflection, both photons are stored in a 1.2-kilometre-long optical fibre for some microseconds. Meanwhile, the atomic state is measured. A rotation of the first photon’s polarisation conditioned on the outcome of the measurement enables the back action of the second photon on the first one. “The two photons are never at the same place at the same time and thus they do not see each other directly. Nevertheless, we achieve a maximal interaction between them,” explains Bastian Hacker, PhD student at the experiment.

The scientists could prove experimentally that — depending on the choice of the photons’ polarisations — either the first photon affects the second or vice versa. To this end, they measured the polarisation states of the two outgoing photons for different input states. From these, they generated “truth tables” which correspond to the expected gate operations and thus demonstrate the diverse operational modes of the photon-photon gate.

The case when the input polarisation of the two photons is chosen such that they influence each other is of particular interest: Here the two outgoing photons form an entangled pair. “The possibility to generate entanglement fundamentally distinguishes a quantum gate from its classical counterpart. One of the applications of entangled photons is in the teleportation of quantum states,” explains Stephan Welte, PhD student at the experiment. 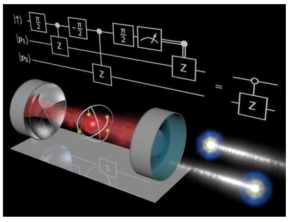