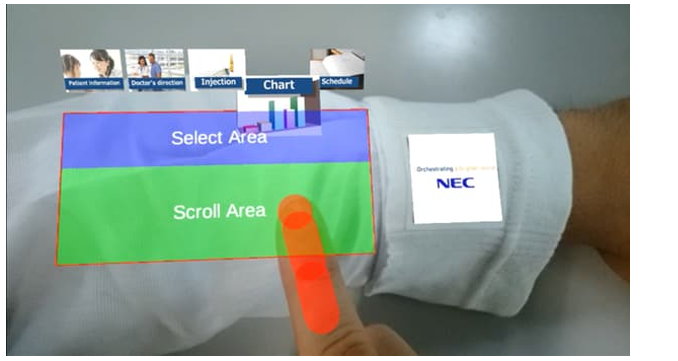 Making interfaces touch-free is a problem with a number of solutions, such asvoice control to hand gesture recognition. NEC’s ARmKeypad brings augmented reality (AR) into the mix to display a virtual interface onto the user’s arm, with input registered through vibrations from the tapping of fingers on the arm. Now the company has announced a new, tap-free version called the ARmKeypad Air that provides a completely contact-free interface.

After we first heard about the ARmKeypad back in 2011, things kind of went quiet until November last year, when it resurfaced in the form of a trial model. That unusual capitalization in the name is there to reflect the fact the device uses AR smart glasses to display customizable virtual keyboards on the forearm and detect the position of the forearm and the user’s fingers, while a modified watch reads when keys have been pressed courtesy of the vibrations produced as the user taps away.

Unlike its predecessor, the ARmKeypad Air doesn’t rely on physical tappings, but instead tracks the movements of a person’s fingers as they hover over the arm. That contactless interaction, along with the removal of the wearable sensor part of the system, makes it perfect for use in sterile environments like operating theaters or during food preparation.

“Moving forward, NEC will use the ARmKeypad and ARmKeypad Air to help improve workplace efficiency in sectors where hands-free operation is required, such as manufacturing, medicine, security, and distribution,” says Yukio Maruyama, of the company’s System Integration & Services Market Development Division.

NEC is exhibiting the ARmKeypad Air at the International Modern Hospital Show in Tokyo this week. 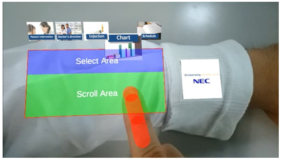