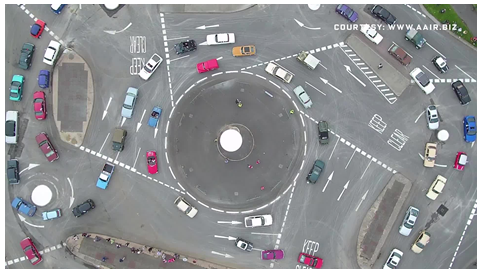 I am from a different land—a different time, maybe—where the car people resist the circling. No circles at all costs, they say. Straight ahead is the way forward. But in this place, across the sea, the cars circle in all directions, within and without each other, a tango of mystery.

This place is Swindon, they tell me. It is in south England, a land recently torn asunder. They call this swirl of movement the “magic roundabout”.

But how does such sorcery work? The roundabout in its common form is already a magic way to get traffic moving faster and more safely. The wise elders teach us four-way intersections are deadly places, that driving in circles reduces the likelihood of what they deliciously call a “t-bone.” The scholars say the roundabout reduces injurious crashes by three quarters.

The magic roundabout is more glorious still, an artifact of 20th century optimism and a belief that all things can be more perfect. It gives the cars multiple pathways to the same destination. As people choose their personal routes, they decrease the likelihood of colliding. They move freely and safely—to the right as well as the left. More options, more efficiency. The elders approve.

What seems a strange and complicated ritual is actually simple: Swindonians enter the magic roundabout from one of five points. They aim their car at their destination, yielding to those ahead of them and following the white markings in the pavement.

While a driver entering a normal roundabout might have to make an entire turn to arrive at their destination, a person of Swindon in a magic roundabout can cut through the circles more quickly. A complex pattern emerges.

But truly, it is a primitive circle, based on simple ideas. Circle on, strangers. 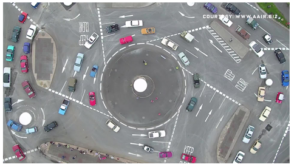