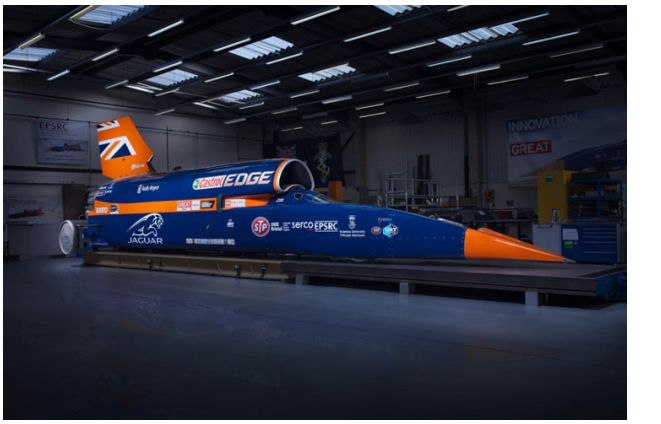 The world land speed record is in serious jeopardy.

That’s because the Bloodhound SSC was unveiled to the world in its final form Thursday in London, and this supersonic chariot won’t just break the land speed record, it’s expected to obliterate it. The Bloodhound represents the collaborative efforts of more than 200 global companies as well as eight years of designing and manufacturing. The team’s efforts have yielded a rocket on wheels that could reach a speed of 1,000 miles per hour — shattering the current world record of 763 mph.

The Need for Speed

Martin Roper, an events manager at the Bloodhound Technical Centre and one of the team’s fire and rescue officers, told The Verge that they wanted to build a car that would push the world record so far out of sight, no one would attempt to beat the record ever again. Based on the Bloodhound’s outrageous specifications, he may be right.

The Bloodhound SSC is a 44-foot-long carbon fiber shell with a ton of power underneath. Both a jet engine and a rocket power the car, and it can accelerate from 0 to 1,000 mph in 55 seconds. The machine requires a V-8 Jaguar engine just to power the pump that funnels fuel into the rocket. For a little perspective, the Bloodhound is as powerful of every Formula 1 car that lines up in a race — combined.

To slow the rig down, driver Andy Green will utilize three separate braking systems — air brakes, friction brakes and parachutes. Pressing the brakes generates 3Gs of deceleration force, which is the same as going from 60 mph to a standstill in a second.

The Bloodhound SSC that the world saw this week is about 95 percent complete, and it’s just the beginning. Over the next year, the Bloodhound team will start testing the supercar in South Africa’s playa lakebed Hakseen Pan. They’ll keep speeds at around 200 mph to test the electronic components, and go for the record attempt in the later portion of 2016 and hit a mark of 800 mph.

But come 2017, the Bloodhound will be fitted with three rockets to reach the 1,000 mph mark, and perhaps put the land speed record out of reach.

To break the record, the Bloodhound will need to complete two one-mile legs — from point A to B and back to A — within an hour. The average speed of the runs is the official speed record. The Thrust SSC set the current record, 763 mph, back in 1997. 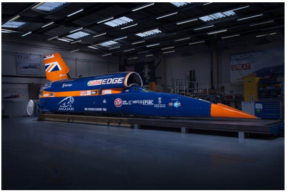 The World’s First 1,000-mph Car Has Been Unveiled