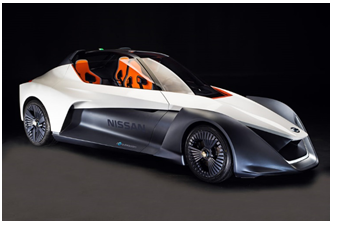 Over the past few years, the world has gotten to know some pretty cool electric vehicles: ludicrously quick Teslas, solar-powered planes, sport bikes with Italian styling. To add to the pile, Nissan now introduces the BladeGlider, a Zeus juice-powered razor blade on four wheels.

Released in Rio de Janeiro this week, the prototype version of a concept Nissan first showed in 2013 is a 268-horsepower sports car with a heart of green, powered by a 220kW lithium-ion battery.

The BladeGlider comes with rear-hinged dihedral doors (because conventional openings have no place in the future) and in two colors: “cyber green” and “stealth orange” (because … deer can’t see it?). The open top lets everyone know who’s releasing the fewest emissions in town, and the three-seat configuration borrowed from the famed McLaren F1 allows room for two passengers. Roll up to the club like the sustainable Liberace you are.

You shouldn’t expect Nissan to actually put this thing on the market, but combined with the successful, all-electric Leaf and its leading efforts in the race towards autonomous driving, it’s clear the Japanese automaker’s girding up for the future. 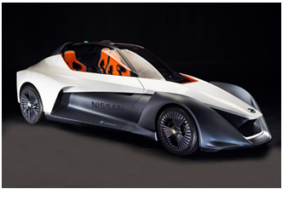