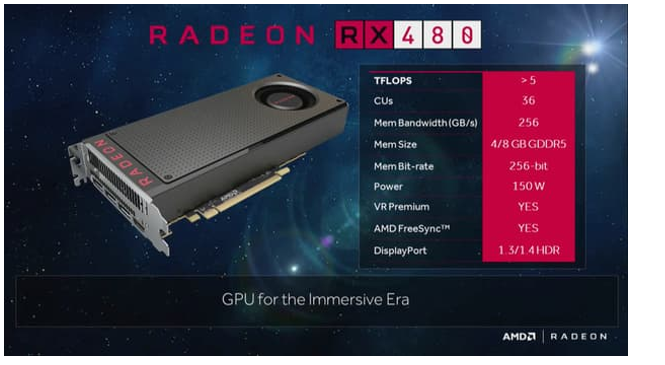 Getting VR-ready requires a pretty beefy rig, and there’s usually an equally-beefy price tag attached. AMD is looking to lower that barrier with the US$199Radeon RX 480 graphics card.

That $199 will net you the 4GB edition of the Radeon RX 480, which AMD says packs the punch of a $500 GPU in terms of VR performance. With this price point the company hopes to drive up adoption rates of VR, encourage developers to create more content for the platform and drive down the costs of VR-ready computers and equipment.

“Cost remains the daylight between VR being only for the select few, and universal access for everyone,” says Raja Koduri, senior vice president and chief architect of Radeon, at AMD. “The Radeon RX Series is a disruptive technology that adds rocket fuel to the VR inflection point, turning it into a technology with transformational relevance to consumers.”

AMD says the Radeon RX 480 is based on what content developers will tune for over the next three to four years, and is the first card to use the company’s low power, high-performance Polaris architecture built on the 14nm FinFET manufacturing process.

The 150 W RX 480 has over five teraflops of processing grunt and will be available with either 4 GB or 8 GB of GDDR5. Along with VR support, the card will be compatible with monitors that feature AMD FreeSync, a technology to smooth over tearing and artefacts at high frame rates, and the high dynamic range of DisplayPort 1.3 and 1.4 monitors. 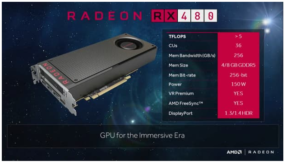