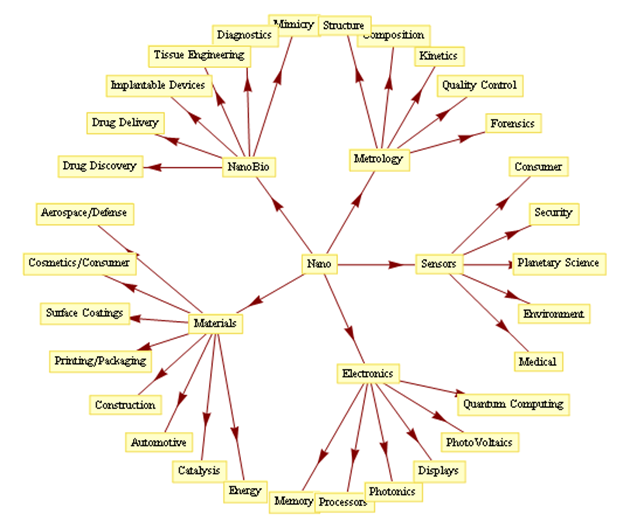 Science fiction movies such as Ant-Man and Fantastic Voyage excite us about the possibility of shrinking ourselves down to the subatomic level. In the Disney version of The Sword in the Stone, Merlin defeats the sorceress Madam Mim in a shape shifting battle by turning into a microbe which makes her sick. All of these touch upon the power that comes with being able to control what is infinitesimally small. In reality, science has made great progress in this regard. But we’re not quite there yet. The prefix nano comes from ancient Greek meaning, “dwarf.” Mathematically speaking, it refers to one billionth of a unit of measure. For instance, a nanometer (nm) equals one billionth of a meter (0.000000001 meters). This is 40,000 times smaller than the width of a human hair, or around three to five atoms wide.

Nanotechnology is the ability to control and manipulate matter on the atomic or molecular level. This new branch of technology is already being used, albeit passively, in sunscreens and cosmetics. But future applications promise so much more. Nanotech could have a revolutionary impact on diagnostics, research, development, drug delivery, tissue repair, detox, surgery, health monitoring, and gene therapy, among other places. Consider a lab working on the subatomic level, able to create microscopic robots and tools to deliver medicines, manipulate the components of a cell, and piece together or take apart DNA. All of this may someday be commonplace in hospitals, labs, and medical centers. Right now, this technology is in its seminal stages, slowly transitioning from the realm of science fiction to science fact.

Nanotech could theoretically stretch DNA out like a bundle of wires. The nanobots would carry out repairs, or snip out faulty genes and replace them with healthy ones. This might someday make hereditary conditions obsolete. In 2004, New York University (NYU) chemists were able to create a nanobot from fragments of DNA able to walk on two legs, each a mere 10 nanometers long. This “nanowalker” could take two steps forward or back. Ned Seeman was one of the researchers on this project. He believes someday that a molecular scale assembly line could be fashioned. A molecule could be moved along and put into place by nanobots in order to engage certain health effects.

Nanobots are also being used to fight cancer. Harvard Medical School scientists recently reported an “origami nanorobot” comprised of DNA. Researchers successfully displayed how these could be used to deliver deadly molecules to lymphoma and leukemia cells, causing them to commit suicide. At Northwestern University nanostars have been developed. These are star shaped nanobots able to deliver drugs directly to cancer cells. Researchers showed that they could dispatch such drugs directly to the nuclei of ovarian and cervical cancer cells. The body often breaks down such drugs before they can be delivered. Nanostars may someday overcome this problem.

Now consider “nanofactories.” Researchers at MIT showed how self-assembling proteins could deliver drugs directly to problem areas. So far, tests have been successful in laboratory mice, where nanoparticles released a specific protein when exposed to UV light. This may prove useful in fighting metastatic tumors, or those who send cancer cells to invade other organs and tissues, causing the cancer to spread. Metastatic disease is responsible for over 90% of all cancer deaths.

Nanofibers are another innovation coming down the pike. These are 1,000 nanometers or less in diameter. They might serve as components to artificial organs or tissues, surgical textiles, and even the next generation of wound dressings. Another area of promise is medical imaging. Nanoparticles could be used to achieve more precise imaging, aiding diagnostics and guiding surgeons. Matthew MacEwan, of the Washington University School of Medicine in St. Louis, has launched his own nanofiber company. These fibers can be used to repair bone, soft tissue, nerves, and even spinal cord and brain tissue in the wake of a debilitating injury.

Though these possible innovations in nanotech sound wondrous, there are still many challenges ahead. Being a cutting-edge technology, the cost is high, limiting research and the ability to scale up production. This causes timetables to be stretched much farther out. A segment of the public is also wary of nanobots swimming around in their systems. Some are worried that the small size may cause complications, though there is no indication thus far that this technology is at all dangerous.

In fact, most researchers in the field say these particles are less toxic than your average household cleaning product. Nanoparticles are simply a part of nature. Theoretically however, if they do end up in the wrong part of the body or malfunction, they might cause disease instead of alleviating it. Then there are more ghastly fears. Could nanotech create robots which enter our brains and cause us to comply with government wishes, a new kind of 1984? Might it lead to an undetectable weapon able to propagate a new kind of terrorism? For now, these fears remain in the realm of science fiction. Whether or not future innovations allow these possibilities to surface is still up for debate. Today, the cost is too great for such worries to materialize, even on the molecular level. 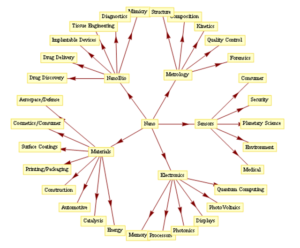