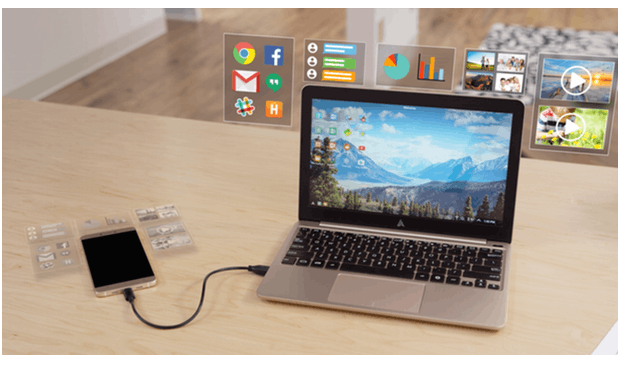 Today’s smartphones are incredibly powerful, with the ability to run productivity apps and games that would have been impossible even on full-blown desktop computers not so long ago. The problem is, the size and touch input of their displays isn’t always the best way to take advantage of all that power under the hood. Andromium’s new Superbook is designed to change that, giving an Android smartphone an 11.6-inch screen, full-size keyboard and trackpad.

Andromium isn’t the first company to attempt to leverage the power of a smartphone to provide the processing grunt of a laptop. In 2011, Motorola introduced its Atrix 4G smartphone, which could be used as the engine for a laptop PC through the use of an external dock. More recently, a California-based startup unveiled system for giving Windows 10 devices a laptop form-factor. A successful crowdfunding campaign for Nexdock was concluded earlier this year, but it’s yet to go on sale.

Andromium itself made its first attempt at a fully-functioning phone-based workstation in 2014. Plugged into an MHL-compatible phone, it gave users the ability to plug in an external monitor, keyboard and mouse. Although it had potential, backers apparently weren’t keen on a connecting various peripherals via a tangle of USB and HDMI cables, and the Andromium Dock never reached its funding goals.

For it’s second attempt, Andromium has ditched the various peripherals and cables and packed everything into a 2-lb (900-g) laptop shell that connects to an Android smartphone via a single USB cable. The Superbook “laptop” packs an 11.6 inch LCD display with 1,366 x 768 resolution, full-size keyboard and built in trackpad.

Although it helps, you don’t need to be running the latest flagship phones to use the Superbook. Provided the phone supports USB-OTG, is running Android 5.0 (or newer) and packs 1.5 GB of RAM, a dual-core processor and 25 MB of free space, you can plug in using a USB-C or MicroUSB cable.

There’s a built in battery, which, on top of charging a connected phone, allows for over eight hours of work. The Andromium OS app enables desktop OS-like features, including mouse cursor, keyboard shortcuts, full-screen operation of Play Store apps, and full compatibility with the Microsoft Office suite. The company also points out that every time you upgrade your smartphone, you’re also updating your computer.

So far, the project has raised more than US$700,100 on Kickstarter, comfortably outdoing the initial $50,000 goal with 26 days remaining. The most basic Superbook pack, which includes a gold laptop, a USB-OTG cable and wall adapter, is at the $99 pledge level, but jumping to $159 will get you a Superbook in blue or gold, a universal smartphone mount for the screen-edge and a wall charger. If everything goes to plan, shipping should start in February 2017. 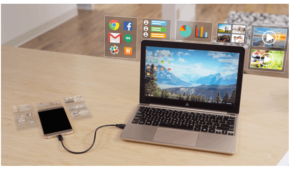