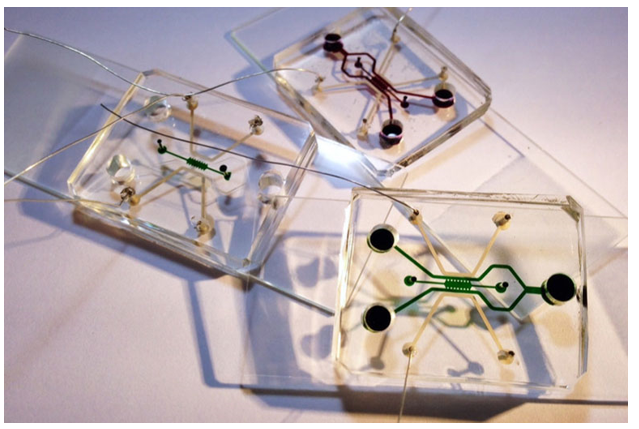 At the post-grad research collaboration called Singapore-MIT Alliance for Research and Technology (SMART), a team has developed a microfluidic device for testing how electric fields influence living cells. The main goal for the technology is to identify the nature of the electric fields that best disrupt the activity of cancer cells, the growth and multiplication of which has been shown in the past to be influenced by external electric fields. Potentially, there’s a chance that electrodes could be used in the future to simply stop and even kill cancer cells completely from outside the body, but more realistically in a minimally invasive fashion.

For now there’s a lot of work to be done to test different kinds of cells under different electric field strengths and frequencies, and there’s already some results the team has obtained.

Some details from MIT:

The researchers fabricated the device from PDMS, a widely used, gel-like polymer, and patterned small channels across the device. They then developed a conductive mixture made from micron-sized silver flakes and PDMS, which they cured, then injected into two channels in the device to form two tiny, separate electrodes. In the region between the electrodes, they injected hydrogels with breast or lung cancer cells as well as small tumor masses. The researchers also injected healthy human endothelial cells. The hydrogels created a three-dimensional matrix to mimic the extracellular environment.

The team subjected each cell type in the 3-D matrix to alternating electric fields at frequencies of 150 or 200 kilohertz, continuously, at an intensity of 1.1 volts per centimeter.

In the absence of an electric field, [research scientist Andrea] Pavesi says the cancer cells begin to proliferate and spread within two days. However, he and [research scientists Giulia] Adriani observed a significant slowdown in tumor progression after three days of continuous electric field stimulation: Proliferation was markedly reduced, while small masses of lung cancer cells did not disperse indicating an inhibition of their metastatic potential. What’s more, healthy endothelial cells in the same device were left unaffected. The researchers hypothesize that healthy cells may require different frequencies to be influenced by an electric field, as their size and electrical properties are far different from that of cancer cells. 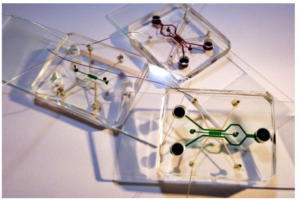