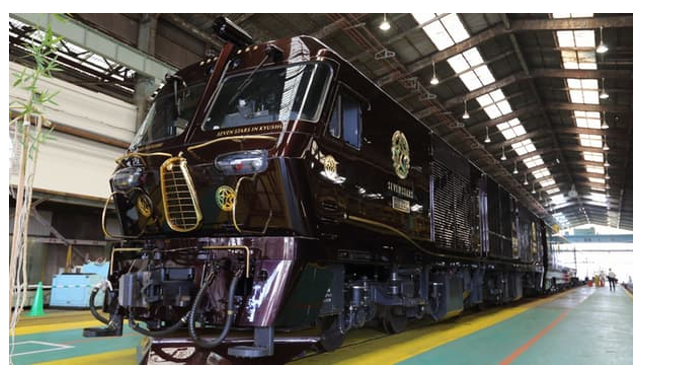 “The idea for a cruise train came from our company president, Mr. Koji Karaike,” Simon Metcalfe from JR Kyushu tells Gizmag. “It was something that he had dreamed of doing since he was a worker in JR Kyushu, and he waited until he was president to put it into action.”

While the “Seven Stars” is not a rating, it does represent the seven regions of Kyushu (Fukuoka, Oita, Saga, Miyazaki, Nagasaki, Kagoshima and Kumamoto) which the train travels to; the seven carriages of the train; and the seven tourist highlights of Kyushu – cuisine, nature, hot springs, history and culture, spiritual sites, friendly hospitality and the sightseeing trains.

Departing from the port of Fukuoka, the luxury train travels through northwest Kyushu and includes a visit to the township of Mt. Aso (the biggest active volcano in Japan) before looping back to its original departure point. The journey is by no means a fast one, with the train traveling at a top speed of 100 km/h (62 mph) and an average travel speed of around 50-70 km/h (31-43 mph).

The train incorporates the latest technology to help reduce the rocking of each carriage, offering a smoother ride for the guests and making it easier to sleep at night. The technology senses the sideways motion of each train cart and automatically works to move the carriage in the opposite direction, thus counteracting the sway.

“In the past, this technology has been used in high speed bullet trains and some local trains, but it is the first time that it has been implemented in a train in Kyushu,” says Metcalfe.

On board, guests will enjoy their very own and large private guest room which accommodates two passengers and comes with a fully-equipped bathroom. If you’re lucky enough to get the best suite in the house (or should I say train) the deluxe suite in the last carriage features a stunning panoramic window, looking out over the train tracks. The cabins have been built using traditional materials.

“Each room has been furnished with different wood, and has a different feel,” says Metcalfe. “The designer of the train, Mr. Eiji Mitooka, put much effort into choosing the various woods used throughout the train and the handiwork is truly impressive.”

The Seven Stars cruise train is already fully booked until the end of next March, and the next round of guest applications will open in January 2014 for travel in July-September. Guests can choose between a 2-day (one night) or 4-day (three night) package. Prices for the 2-day package start from US$1,571 per person and the 4-day package will set you back $3,963 per person. 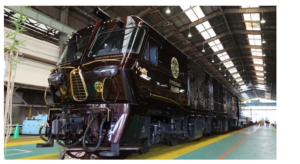